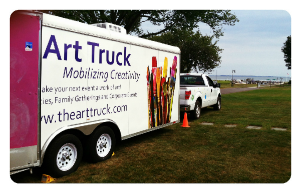 I’m Maura O’Shea, founder of The Art Truck, and this is Our Story….

In 2010, after 18 years as an arts educator and administrator, I left my position as Deputy Director at the New Britain Museum of American Art to turn my attention to launching a creative venture in my home town of Glastonbury, CT.

My original concept was a bricks and mortar studio space where guests could drop in to participate in creative, artistic activities and parties. In spring of 2011, while discussing the challenges of finding an affordable storefront location with a friend, the suggestion was made to take the concept mobile. And why not? I immediately launched a search for the perfect vehicle.

Two more happy coincidences occurred while on the vehicle search: another friend suggested looking into modifying a tow style trailer (he had worked in many as a field biologist); and one of my former star employees, Morgan Fippinger, from the New Britain Museum of American Art was looking for a career move.

I called Morgan about the venture and a partnership was formed. Morgan brought big talent in teaching and customer service to this venture, along with enthusiasm for multimedia design and social media.

Geared-up with a mission to Mobilize Creativity, The Art Truck, LLC was officially formed in June 2011 and sealed when I bought our first Ford F150. By July, we took delivery of our first “raw” car hauler and spent the next three months outfitting the interior and learning the geometry and art of driving our first car hauler! 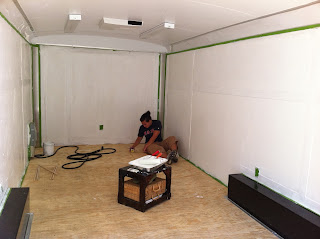 We launched Connecticut’s first mobile art studio with a plan for delivering five-star, artistic parties and events throughout the State. 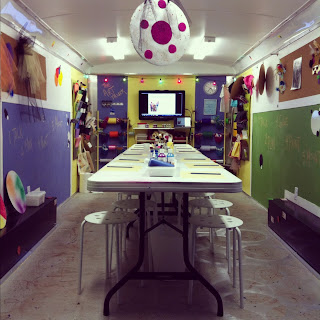 By the end of 2011, with no marketing other than a few emails to friends who shared with friends, (who shared with friends), The Art Truck had successfully hosted five parties in the region. Responses were positive and we were encouraged. So, we spent the winter building a great website, creating an email list and planning a marketing campaign. We knew moms looking for birthday party options would be our initial target but how could we reach them, introduce them to our brand new product, and convince them to buy?

In February of 2012, The Art Truck launched a Living Social deal aimed at Hartford County. Web site traffic hit 4,000 views in the first three days and dozens of purchases followed. The Art Truck was on the map!

The first party of 2012 was held on St. Patrick’s Day alongside the beach in Madison, CT. Guests decorated flip-flops and tote bags then sported their artsy footwear while running on the beach.

Today, my focus is on designing top-notch creative experiences for customers of all ages while Morgan develops marketing efforts and delivers the very best art parties and programs in Connecticut. And while dozens of five-star testimonials from delighted customers let us know that we are on the right path, this journey has just begun.